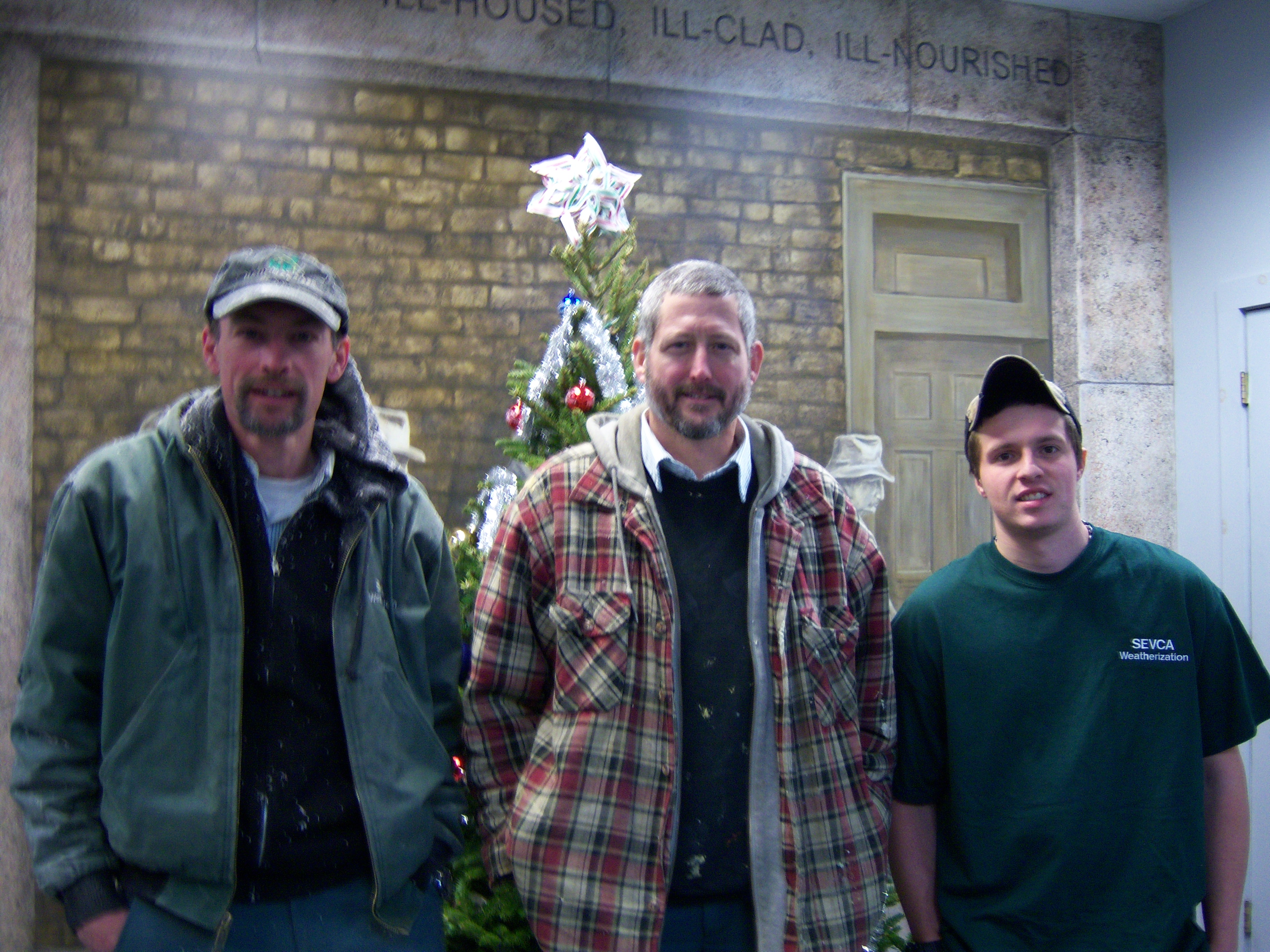 There have been LOTS of changes in the Weatherization department over the past several months, with a number of new hires and a promotion! But “new” is a relative term, since many are actually rejoining SEVCA after an absence of a few years. Here’s the rundown:

Nate Stoddard: promoted to Operations Manager for Weatherization in September. Nate has been with SEVCA since 2009, when he started as an energy auditor. He’s held a number of positions since then, including advanced auditor, quality control, and auditor supervisor. His recent promotion involves the creation of a new Operations Manager position, combining the previous Auditor Supervisor and Production Coordinator positions in the department. Nate is enthusiastic about the increased efficiency in the program’s ability to plan the work flow with this new role, since having the production side and the auditors both report to him streamlines the process and creates better service for clients. Prior to joining SEVCA, Nate worked in the building industry, the automobile service industry, and served 5 years active duty in the Army from 1987-1992. He is a father of two and lives in Westminster.

Tristian Crawford: Auditor, hired in October. Tristian rejoined SEVCA to train as an Auditor, having served as a Crew Chief from 2014-15. He officially became an Auditor this month. A Bellows Falls native, he now lives in Chester with his wife and two boys, ages 6 and 9. Prior to working for SEVCA, Tristian did power line maintenance for 10 years. He says he’s “…happy to be back, and I’m looking forward to being here for a long time.”

Todd Clark: Crew Chief, hired in April. Todd is another staff member who has rejoined Weatherization after an absence. He served as Crew Tech for 3 years and Crew Chief for 7 years from 2003-13. Todd has had a number of other jobs, including 12 years at C&S Wholesalers and most recently, as a Community Outreach Specialist for HCRS, where he still works part time as a member of their Crisis Team. Todd has also trained as an EMT, though he is not certified. This father of five children, ranging in age from 11-26, he has lived in Westminster for the last 20 years, although he grew up in Maine. He says he loves the opportunity to learn different things at SEVCA, and that “it gives me a good feeling to help people.”

Brian Mueller: Crew Tech, hired in November. This former Marine and helicopter mechanic, who hails from Colchester but moved to Bellows Falls 15 years ago with his wife and three kids, has worked for many years in property maintenance and small construction. He first learned about SEVCA through his employer, who was a contractor for our Emergency Home Repair Program (EHRP), inspiring him to join the Weatherization staff as a Crew Tech from 2010-13. He left to work independently for a time, but was happy to come back to SEVCA when the opportunity arose, saying “I feel very welcome here.”

Harrison Rouleau: Crew Tech, hired in October. Harrison is a recent graduate of Kindle Farm High School who comes to SEVCA with a background in carpentry, logging, and farming. In fact, he says he’s a “jack-of-all-trades, master of none!”  He values the on-the-job training he is able to get at SEVCA and has shown himself to be a hard worker who has an affinity for weatherization work.

Alexandra Jarrin: Business Administrator, hired in July.  Alex, a former AmeriCorps worker in the Northeast Kingdom in the early 1990s, said she was eager to get back to working in the nonprofit sector after working 25 years in the corporate sector. When she saw the job posting as Business Administrator for Weatherization, she said to herself, “This is my job!”  In this position, Alex deals with all Weatherization client applications, certifying eligibility and ensuring all the necessary documentation is submitted, and she’s also responsible for billing and reporting. “Every day is different,” she says. “No two situations are alike. It’s extremely rewarding.” A resident of Bellows Falls, Alex is the mother of three sons and has three grandchildren. She has an MBA from the Hagen School of Business at Iona College in New York.

Tawny Staskunas: Office Assistant, hired in July. Prior to joining the SEVCA Weatherization team, Tawny worked with the Rehab Loan Program at Windham & Windsor Housing Trust where she developed a knowledge of the resources available to help low- and moderate-income homeowners have safe and warm housing. Tawny enjoys being able to collaborate with other organizations to provide the best possible outcomes for customers. Tawny has a BA in Human Service Management from Southern Vermont College and spent most of her career at the Vermont Department of Labor, retiring after 30 years. She resides in West Chesterfield with her husband, John and their dog, Gypsy.

John Nielson: Emergency Home Repair Coordinator, hired in December. John worked for SEVCA on a special ARRA-funded project from 2011-12, managing the installation of solar hot water and hot air panels to help low-income households save on energy bills. Now he’s returned as the EHRP Coordinator, based in the Weatherization Department, saying he feels very much a part of the Weatherization team and still knows a lot of the staff. John lives in Westmoreland, NH, and most recently worked in a Maintenance/Security position at the Crotched Mountain Rehabilitation Center in Greenfield, NH, an hour away from his home. Enjoying the much shorter commute from just over the river, John says he’s excited about the opportunity to revive the EHRP, which has been without a Coordinator for much of the year. He brings a long history of construction experience to the position, along with the motivation to help SEVCA achieve its mission.