The Other America: In 1962, Michael Harrington published “The Other America”. An illuminating social commentary and sobering analysis of poverty in the United States, Harrington’s book called attention to the isolation and invisibility that was so characteristic of the nation’s new poverty. Harrington challenged the assertion that the country’s economic problems had been solved during the boom years after the Second World War, arguing that poverty had not been defeated but had only had become invisible. In fact, 40 million Americans were living in conditions of poverty.

“There are mighty historical and economic forces that keep the poor down; and there are human beings who help out in this grim business, many of them unwittingly. There are sociological and political reasons why poverty is not seen; and there are misconceptions and prejudices that literally blind the eyes. The latter must be understood if anyone is to make the necessary act of intellect and will so that the poor can be noticed.” 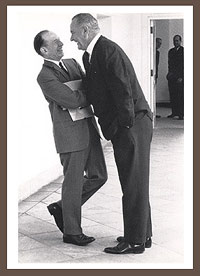 The War on Poverty: On January 8, 1964, President Lyndon B. Johnson made a declaration that would transform the lives of millions of people: “this administration, here and now, declares an unconditional war on poverty.” In his later memoirs he wrote: “…I wanted to rally the nation, to sound a call to arms which would stir people in the government, in private industry, and on the campuses to lend their talents to a massive effort to eliminate the evil.” The declaration of war was deliberate and signified: Sacrifice – sacrifice by nation to urge war against an ancient impersonal foe to meet a national need; Moral Obligation- providing awareness that would stir and energize the nation’s conscience; Mobilization- “total mobilization of all the nation’s resources; moral, spiritual, intellectual and financial, to challenge a condition.”; Strategy- National effort, resources, centralized command and larger attacks; The Battle Plan: defines the objective, identifies the enemy and chooses weapons and tactics.

The Economic Opportunity Act was signed in August of 1964. Robert Sargent Shriver Jr. was redirected from his tremendously successful Peace Corps program, and given the unenviable challenge of tackling the complexities of American poverty. Shriver was called upon to serve as the first Office of Economic Opportunity Director, and began his national listening tour. Shriver traveled the country, venturing deep into the heart of both urban slums and the forgotten regions of rural destitution, talking to those who struggled with poverty daily. He was stunned and deeply moved by what he witnessed. Under Shriver’s direction innovative new programs would be initiated to address the core issues of poverty, and provide new tools and options to empower people and whole communities that had previously felt powerless. Efforts such as Youth Corps, VISTA, Job Corps, Legal Services, Work Study, Upward Bound, Head Start and Community Action were launched during this time.

The Community Action and Head Start programs were among the most controversial of these early anti-poverty initiatives, offering the most promise for reform but the most potential for turmoil. The inclusion of those who were entrenched in poverty in the distribution of power was a daring policy experiment that elevated the role of marginalized people but ruffled feathers as federal, state and local bureaucracies felt bypassed. This was particularly true in the southern states. Through Community Action, the War on Poverty became inextricably entwined in the struggle for racial equality.

Later, when attention and funding would be re-directed away from the War on Poverty towards the War in Vietnam, Dr. Martin Luther King Jr. would take up the cause. King had come to understand the complex connections between poverty, racism and social inequity on both a local and global scale. King’s last speech, 4 days before his assassination in 1968, was a challenge to the nation, and a call to action against the violence of poverty, announcing his “Poor People’s Campaign” and upcoming march on Washington. Sadly, it would never come to pass. Community Action, however, would continue on as an enduring model in the efforts to combat poverty at the local level nationwide.

Community Action: Title II of the Economic Opportunity Act provided for the establishment of Community Action Agencies. It’s basic purpose is: “ to stimulate a better focusing of all available local, state, and federal resources upon the goal of enabling low income families and low income individuals of all ages, in rural and urban areas to attain the skills, knowledge and motivations and secure the opportunities needed for them to become self-sufficient.” A CAA’s effectiveness was to be measured not only by the services directly provided, but also the improvement in community’s attitudes toward the low-income population, and the efficient allocation and focusing of public and private resources for those anti-poverty purposes. To carry out its mission effectively, the CAA must work with three groups in the community: the public sector, the private sector, and the so-called “poor”. 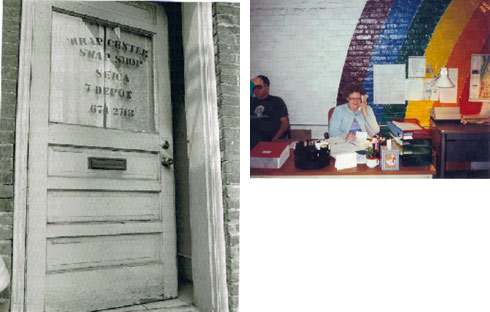 SEVCA: Southeastern Vermont Community Action opened its doors in 1965 in Bellows Falls, VT to serve the low-income population of Windham and Windsor Counties. SEVCA’s mission was founded on the belief that poverty need not be a permanent condition, that people can be empowered to rise out of poverty, and that the strength of our communities is measured by the quality of life of everyone within them. Early efforts focused on mobilizing the community to resolve basic needs issues such as hunger and homelessness. Family Services and crisis resolution would become part of the core of the organization’s services, integrating Crisis Fuel Assistance and Food Stamp Outreach. The SEVCA Good Buy Stores were established to provide resources and funding to sustain our programs, and options to assist those in need of clothing. Later, important programs such as Weatherization, Head Start and Micro Business were incorporated into SEVCA’s key departments as well.

Many of the earliest programs launched by SEVCA would branch off and become well-established in the local communities in their own right, such as: Carpentry for Women, Action for Children, Youth Corps, Food Commodities and food shelves, nutrition and gardening, public transportation, federally qualified health centers and dental clinics, and much more. Some still recall the SEVCA Wood Stoves, an early energy efficiency and community development effort that created new jobs and provided affordable heating options for low-income households. The porcine iron stoves, although no longer produced, were incredibly popular and can still be found in the homes of local Vermonters.

SEVCA has continued to serve low-income people in this area for over 50 years. During that time, the problems they have faced have been diverse, complex, and constantly changing. Our agency has had to develop a broad and multi-faceted approach that reflects the breadth and depth of those problems and enables SEVCA to be flexible enough to adapt to changing needs and conditions. In 2015, for our 50th Anniversary, SEVCA unearthed a great deal of information on the organization's history. Click this Timeline to learn more about SEVCA's origins, the people that influenced the organization's trajectory, and the programs that were developed in response to local needs.

Today, SEVCA employs a staff of approximately 100 employees, a committed group of people who are bonded and energized by their shared desire to learn new approaches that can help them to effectively impact the lives of others. We rely upon their valuable experience to execute the wide array of programs and initiatives through out the region that address the comparably wide range of poverty-related needs, in the areas of crisis intervention, affordable housing / homelessness prevention, home energy costs, business startup and support, education and skills training, early childhood development, family support, parenting, food and nutrition, affordable clothing / household needs, income budgeting / savings, information & referral, and service coordination.